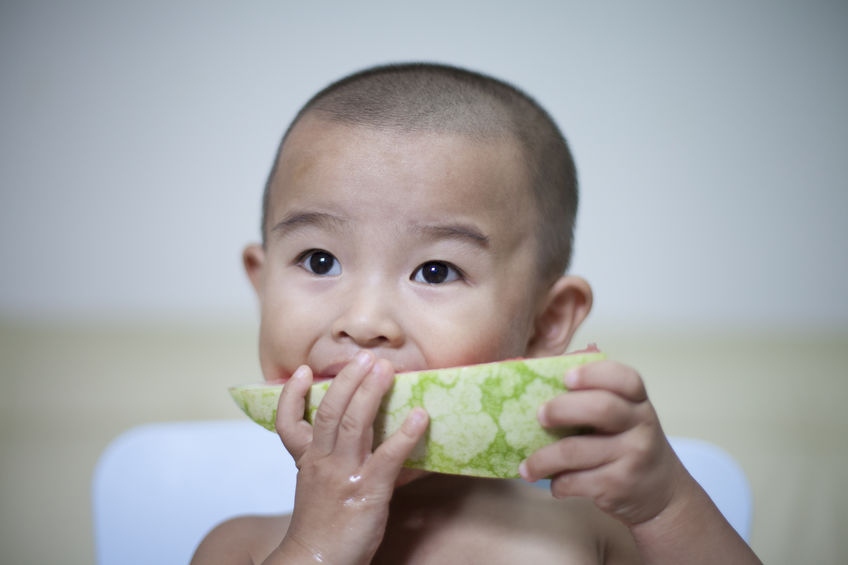 Baby led weaning is an approach to weaning that has been researched and documented by Gill Rapley, who has written a book on the subject called 'Baby-led Weaning'.

The approach is not new. But, draws on what we know about weaning practices in the past, babies development and the experiences of parents and babies during the process of introducing solids.

Baby led weaning is an approach to weaning that has been researched and documented by Gill Rapley, who has written a book on the subject called 'Baby-led Weaning'.

The approach is not new. But, draws on what we know about weaning practices in the past, babies development and the experiences of parents and babies during the process of introducing solids.

The approach is very much ‘common sense’ and based around finger foods. It makes weaning fun and enjoyable for parents and babies, promotes independence, and helps develop hand eye co-ordination and chewing skills. It also saves time and money as babies can eat family foods and join in mealtimes right from the start.

The workshop I offer looks at both traditional spoon feeding and baby led weaning so you can decide which approach will work best for you and your baby.

These workshops cost £15.00 per family payable in advance by Paypal sarah@nurisngnurture.co.uk.

I can also provide a workshop in your own home for you individually or for you and a group of friends.

For more information and to book workshops please phone or email.

Having heard about BLW during my postnatal weaning session from another mum who had gone down that road I realised that it was something that might really suit our baby and our family's lifestyle. Shortly after this I heard from Sarah, who I'd previously used as a LC helping us with latch issues, that she was running a BLW workshop for interested parents.

My partner and I went along with open minds and were fascinated to hear more about the history of weaning infants and why we as a society had moved towards the idea that baby weaning meant one thing and one thing alone - baby purée!

We already knew that we would not begin weaning L. on to solids until he was 6 months and to us it made more sense to move straight to what we felt was real, whole food. By that age he could sit unassisted and handle objects himself so he really didn't need any help feeding himself. We knew that by this stage his digestive system would be more mature and he wouldn't need to have his food mushed up.

Days after L. turned 6 months we went away and I started him on finger sized pieces of whatever I was eating - including a memorable dinner during which he spent a considerable amount of time sucking away on a piece of stewed wild boar!

Since then we have had a great time trying lots of new foods and although he initially pulls a face at new tastes none have been rejected.

The question we most often get asked is about choking and gagging. Yes, he has gagged - but only in the early days when he was learning where his gag reflex was in his mouth, and this actually prevents them from choking.

After two months he's only just starting to swallow his food but for us we believe it's more important that he learns to enjoy the tastes and textures of his food at this point. His main source of nutrition remains breastmilk at this stage and I know that in time as he starts swallowing more of his food that will gradually replace his milk.

I also trust, as I have done since birth, that he is the best judge of how much food he needs, so even though it might seem to an outsider he doesn't eat much, he will always make sure he eats enough!

It really is remarkably easy and great fun, and not nearly as messy as you might think!

Registered with and regulated by the Nursing and Midwifery Council.